The Alfred P. Maurice WWII Drawings collection consists of drawings and sketches completed during Mr. Maurice’s service with the Army Air Corps between 1942 and 1946. The drawings are broken down into categories that include: training at the Army Specialized Training Program at Michigan State College; training at Lowry Field in Denver, Colorado; travel by train across Midwest to Marysville, California; shipboard travel to and from the South Pacific; and time served in New Guinea and the Philippines.
In an interview while reviewing each drawing, Mr. Maurice added explanations to many descriptions in this collection. The drawings in this collection along with the added interview tell the story of one soldier’s experience serving during World War II.
Alfred P. Maurice was born in New Hampshire in March 1921. His lifelong art career has included: Muralist for National Youth Administration; Instructor and Administrator of the Art Program at Michigan State, Macalester College University of New York, New Paltz, Maryland Institute College of Art, and University of Illinois at Chicago; and Creator/Director of the Kalamazoo Institute of Arts in Michigan.
Letters written to his wife (then fiancée) during his time in service from 1944-1946 are available in Digital Commons @ WOU. Some of the letters have information about the images this collection.
The image scanning by James Masnov and Kalea Borling, WOU Archives student employees. Descriptions by Kalea Borling with editing assistance provided by Zoe Strickland, WOU Archives student employee and Jerrie Lee Parpart, WOU Archives Coordinator.

In Copyright - Educational Use Permitted (InC-EDU) 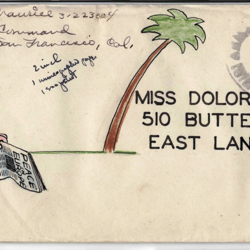 Herman waits on a bucket for his ship to come in to bring him to the Philippines. There is a palm tree on the right side of him and a location sign post pointing to Tokyo and New Guinea 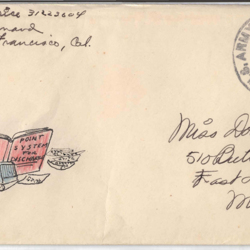 Herman tries to calculate the amount of points he has and needs to go home while laying belly down on the floor with paper scattered all around him. 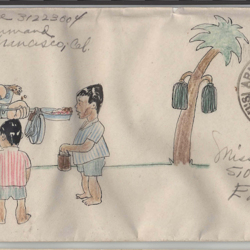 Herman runs away with his mess kit full of food from four Filipino children holding pails who are trying to scrape off what little food he has left. A palm tree is shown on the right. 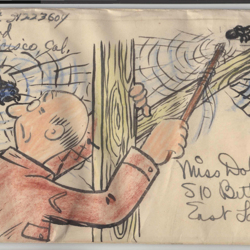 Local Life Scene with the Family Water Buffalo in the Truck 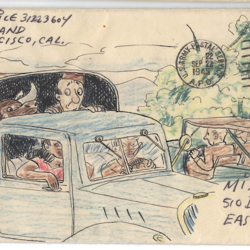 Herman hitchhikes a ride from filipino farmers. He stands in the bed of a truck next to a buffalo while Filipino farmers drive to the downtown city.

Herman Checking the Days Off 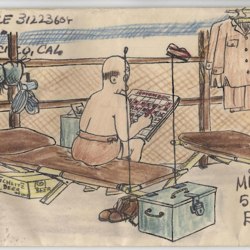 Herman sits up in his bed, crossing off the days on a calendar to give him hope of going home. There is view of another bed on the right, clothes handing above, a shelf to the left and other items around the room.

Up at 6'oclock in the Morning for Roll Call 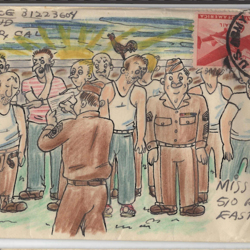 Herman and other soldiers stand in rows in front of a officer at 6 am for roll call. Most of the men are still in the process of getting dressed. View of the sun rising is behind them.

Whiling Away the Time, Keeping in Shape Playing Volleyball 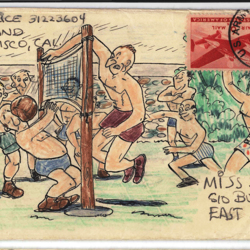 Side view of a game of volleyball with six shirtless men on either side. Herman gets hit in the face with the volleyball by an opponent spiking the ball towards him. In the background there is view of a stone wall and a green bush.

Sneaking Up on the Goat for Some Fresh Milk 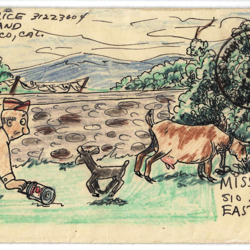 Herman crawls towards a family of goats to obtain some fresh milk. There is a view of a stone wall, a small house, and some mountains behind the wall.

Who Stole My Socks 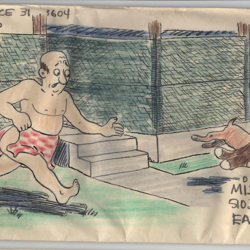 Herman, wearing only a red plaid towel to cover his bottom half, runs toward a dog. The dog runs to the right with Herman's socks in their mouth. 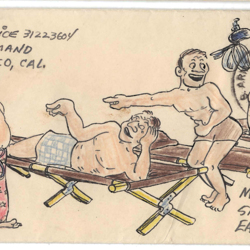 Herman puts on bright red pajamas mailed from home which have stars and planets on them while his three tent mates point and laugh at him. 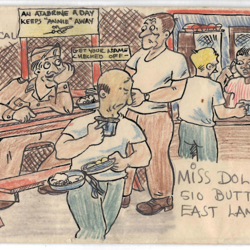 Herman walks away with food and a chemical called atabrine that aided in the prevention of malaria. In the background there are two wooden benches with people eating and signs that read "An atabrine a day keeps 'Annie' away" with a sketch of a…

Herman Has an Encounter With a Fan 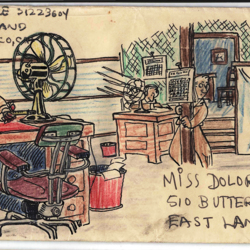 Herman stands in front of desk with an arm sling and bandages around all his fingers after ramming his finger into the fan by accident. In the background there is view of other soldiers; one behind a desk, and the other clutching a post. 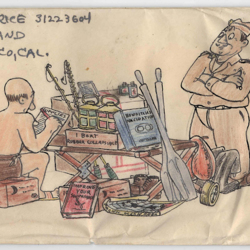 Herman sits on a ration box while holding a supply list while surrounded by camping supplies for getting ready to row home in a row boat. 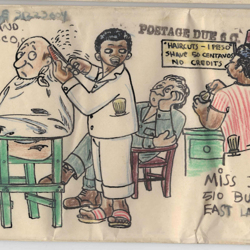 Herman sits in a barber shop, getting his hair trimmed short by a Filipino barber as a way to pass the time. In the background are two other soldiers waiting their turn, and then one other Filipino barber. 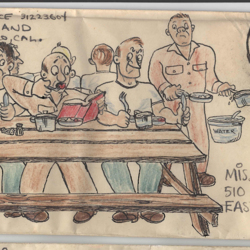 Herman eating in Mess Hall at a Bench Table surrounded by other soldiers, while reading a red covered book. Reading was often used as a thing to help pass the time. 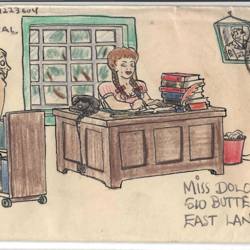 Maurice's fiance, Dolores, is pictured at a desk in the library at Michigan State University while to the left is a man leaning on a book cart staring at her while she works. This image is what Maurice would imagine would happen back in the states… 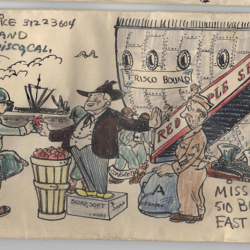 A line of soldiers who have accepted the 'Red Apple' deal received preference to go home two months early and are pictured here waiting to get on a Frisco bound ship while being handed red apples from a white haired man. Herman stands to the right… 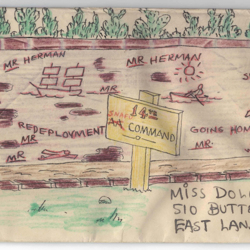 Herman stands in front of a brick wall that is covered with graffiti, showing phrases that wouldnt be made otherwise, such as 'Mr. Herman', 'Redeployment', drawings of planes and boats. A yellow sign stands in the middle reading '14th AA Command'… 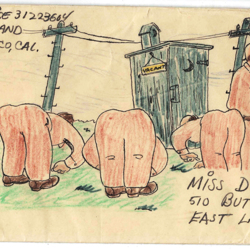 Four soldiers are bent over, showing only their behind, while picking up trash on the ground around camp. Herman is shown to the right putting the trash from his hand into a red 50 gallon drum that reads 'Trash'. View of a portable toilet with the…

Killing Time Tidying up the Office 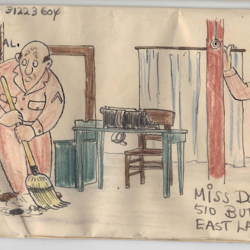 Herman is shown sweeping the floors of the office as it was common to volunteer to clean the office when there was nothing to do. There is view of two desks in the background and an officer watching over herman while leaning on a pole.
View all 187 items