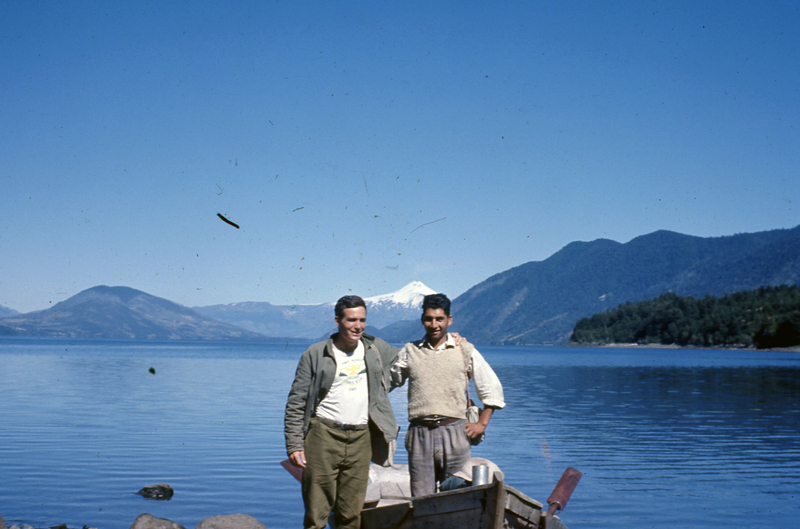 Mario Nahuel and Lorenzo on the south shore of Lake Caburgua

Caburgua is a unique cultural and natural area of Southern Chile.  This is a history of the people who colonized Caburgua and subsisted there in relative isolation until the latter 1960s. Rapid changes began to occur thereafter, which transformed the community into a popular tourist center and gave it easy access to Pucón, a nearby city. Many descendents of the first colonists still live in Caburgua, but their lives have been so transformed that their past is rapidly disappearing. Lorenzo, a Peace Corps Volunteer from 1965-1968, has sought to record this historical transition with this visual archive. He worked with the people of Caburgua and has visited and corresponded with them since.[1]

The staff at the Western Oregon University Archives always seek better ways to preserve historical materials and interpret the past. To this end, they scanned the dozens of slides, entered relevant descriptive material on a spreadsheet, and then used this material to illustrate this interpretive essay. Through this digital archive, the people of Caburgua and others can access past images of the families and life in the community, even if they now live in Santiago, Buenos Aires, or Chicago.[2]

In addition to the images referenced in the essay, more images of Caburgua can be found in the Caburgua Visual Archive.

If you have questions about the exhibit or images, please contact John Rector at caburgua@wou.edu.

[1] Lorenzo is Spanish for Lawrence, and is the name the author used in Caburgua.

[2] Thanks to WOU Library staff Sue Kunda, Jerrie Lee Parpart, and Stewart Baker for believing in the viability of this project and making important contributions to it.  Thanks also to James Masnov for scanning the slides.