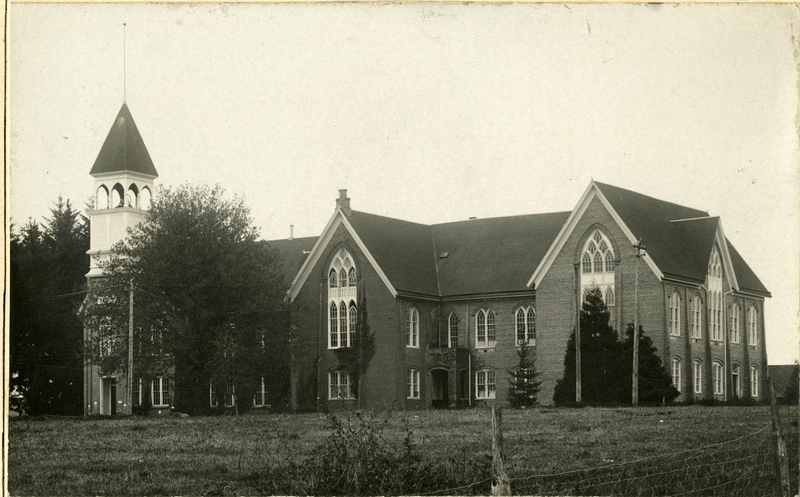 In 1869, Thomas Franklin Campbell became the president of the university, which was then known as Christian College. Once assuming presidency, he started a fundraising campaign to start the building that is now known as Campbell Hall. The university’s library was on the first floor of the North Wing of Campbell Hall from 1899-1951. J.B.V. Butler was the first known librarian of this library, serving from 1898 to 1909.  Graduating from OSNS himself in 1884, Butler had no training or education as a librarian. However, his position on campus was prominent. During Butler’s time as librarian, a new wing of Campbell Hall was built and the library took up an entire floor.  The Board of Regents also funded a tremendous increase in the library budget. Butler was able, from his legendary roll-top desk, to oversee a rapidly-growing, carefully selected collection.

Prior to 1898, there was a small library supplied to the college by Bro. E. Bristow of Lane County in 1872. Only about 200 volumes were collected by 1877. The library collection continued to grow with help from the literary societies on campus, The Board of Regents, and donations from the community, faculty, and students. It was decided in 1885 that control of all library business was to be conducted by the Literary Societies. Two people from each of the three student-led Literary Society groups would form to create the Library Association. It is from the Library Association that many of the new books came to the library. Many of these available books were fiction and included magazines, the Portland Newspaper, and weekly papers from the State were donated and received (1908/09). There was also a rental library (established in 1932) that had over one thousand textbooks available for students. The cost was 40 cents a term per book. This allowed students to rent out textbooks for classes at a low price. 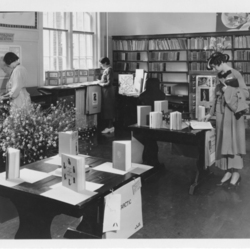 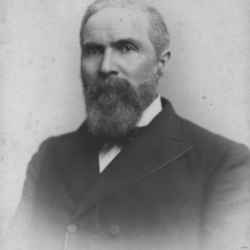 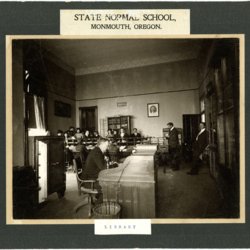 Inside the Campbell Hall library in 1904. J.B.V. Butler is sitting at his desk, and Pheby Boche is leaning against the wall. 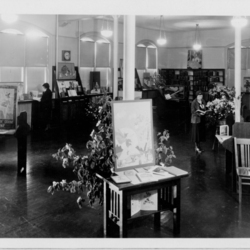 Interior of the Campbell Hall library in 1898.