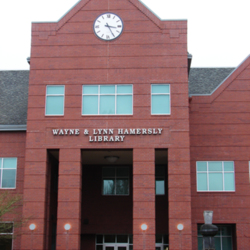 Front Entrance of the Wayne and Lynn Hamersly Library 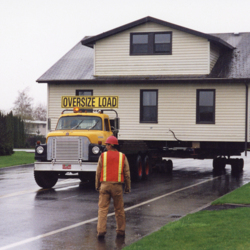 Watson House being moved by a truck to make room for Hamersly Library.

The library currently occupies the building known as the Wayne and Lynn Hamerlsy Library. The Hamersly Library’s construction began in August 1998 and the building was officially opened on September 20, 2000. The funds for this building came from donations by private sources, the State General Fund, and State XI-G Bonds to total $14,768,000. It was primarily built to address new technology and the growing student population and collections. This building was significantly larger than the APSC building with 46,697 more square feet and twice the amount of space allotted for shelving, classrooms, conference rooms, study rooms, seating, and computer workstations. 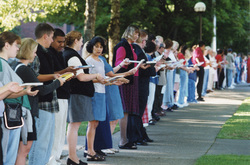 Students line up on the Monmouth Avenue sidewalk, passing books

A book brigade was used to move the books from the former library building to the Hamersly Library. It occurred during the Opening Ceremony of the Hamersly Library in September 2000. Over 200 people participated which included current students, alumni, faculty, and staff. 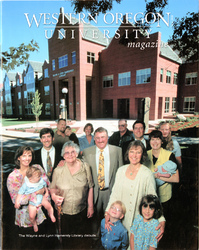 Wayne and Lynn Hamersly with their family standing in front of the library, from the Fall 2000 issue of WOU Magazine.

Wayne and Lynn Hamersly donated $1,000,000 for the construction of the library which significantly helped move the project toward its goal. The Hamersly’s later added another generous gift for library collections and to establish a library endowment. Both Wayne and Lynn were former graduates of Western. 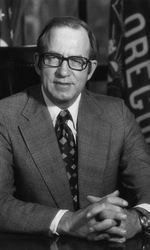 The University Archives was originally started as a “Treasure Room” in 1943 by the Alumni Association. It contained mementos, records, and pictures housed in Campbell Hall until the Columbus Day Storm in 1962. The collection was moved to the library building (now the APSC building) where Ellis Stebbins added to the collection while doing research for a history of the university titled “The OCE Story”, (later added to by Dr. Gary Huxford to create “Since 1865…”.)  When the Hamersly Library was built in 2000, the Friends of Governor Robert W. Straub raised funds to complete the archives area which is now the home of the University Archives artifacts and documents which pertain to the history and development of the University. With this move, a special collection of the personal political papers of Governor Straub was added to the University Archives and the suite of rooms was named in his honour.