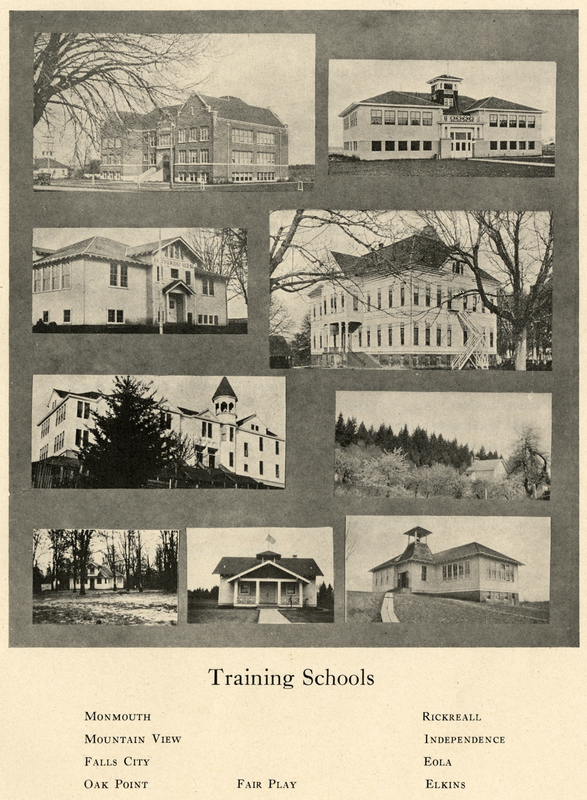 By the end of the 19th century, many graduates from Oregon State Normal School were hired in rural areas of the state. These rural teachers reported to their county superintendents that they had little contact with their colleagues in other rural communities and were rarely visited by school district officials. As a result, in the late 1890s Oregon State Normal School set up an observation contract with two schools in rural Polk County to give teachers-in-training an opportunity to observe what it was like in a small school setting. In 1917, this program was expanded when Oregon Normal School (ONS) (previously the Oregon State Normal School) hired M.S. Pitman to develop a Rural Training Center Program. Between 1917 and 1938, students were sent to live at one of ten schools in Polk and Benton counties to receive experience in a rural setting.

The forerunner to the Rural Training Program was Cochran School in Dallas and soon joined by Elkins School in Airlie. These schools were used for observation where students in the training program could experience a rural classroom.  There are few details of the agreement with Cochran (sometimes spelled Cochrane) or Elkins, nor the details of the expectations of participants in the program.

By 1916, in order to earn an elementary teaching certificate, ONS students were required to participate in observation and practice teaching in an affiliated training school for six weeks. Many selected to live at a Rural Training Schools rather than the urban Monmouth and Independence Training Schools. The rural classrooms were supervised by a critic teacher who had experience in rural communities.  The salary of the teacher performing critic duties was paid for by ONS, but they remained employees of their individual district.  The rural experience consisted of two weeks of observation, two weeks of assisting with lessons, and two weeks of teaching responsibilities. Student teachers rotated through such that there were no breaks in elementary classroom lessons creating consistency of education for the rural elementary students.

The Rural Training Schools Program operated between 1912 and 1940.  The ten rural schools participated in the program from the many small, remote communities throughout Polk and Benton counties.

Unlike the “urban” training schools in Monmouth and Independence, student teachers temporarily lived in the rural communities where they taught, and ONS encouraged local involvement. In some communities, in addition to academic lessons, children who attended rural schools learned how to raise farm animals, such as chickens and cows, and to maintain basic gardens. Produce was sold at market and the proceeds used for lunches.

Many of the rural training center buildings still stand and have been repurposed; while others have been absorbed in renovations or replaced with modern facilities. Oak Point and Elkins school buildings are now both privately owned residences; Rickreall school is now a privately owned business; and the Children’s Farm Home is now a residential treatment facility. Of the ten original rural training centers, only the Falls City and Independence schools are still used as teaching facilities.

The map below allows you to see where each was located. 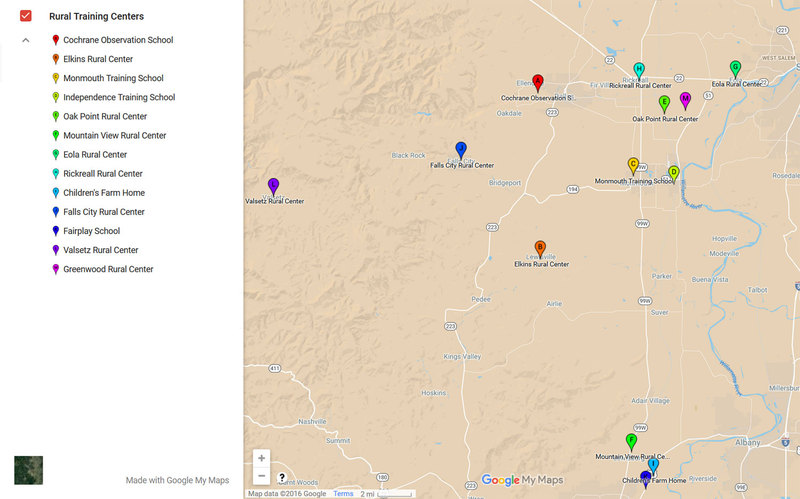