The town of Monmouth was established in 1856 within months of Monmouth University (now Western Oregon University). This collection has photographs of early Monmouth and Polk County. Included are photographs of buildings, people and the local community which help document the history of this institution.

This is a growing collection. Additional images will be added as they are discovered in the archives or donated by alumni descendants or community members. 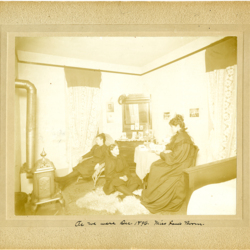 "As we are Dec. 1896. Miss Fani's Room." Three women seated in a room. One woman with her feet propped by a wood stove; one woman seated on a fur skin rug in conversation with a woman holding a book. A mirror atop a chest of drawers holds… 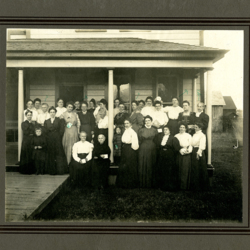 Monmouth Book Club at the home of Mrs. Sunday, November 1908. A group of about 30 women (including two young girls) on the porch of a house. Handwritten letters by certain individuals correspond with the list written on the back. 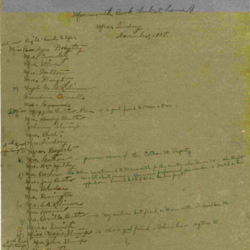 Back side of the Monmouth Book Club photograph with a handwritten list of names. Some names have corresponding letters written next to individuals on the image side. " Monmouth Book Club at home of Mrs. Sunday November, 1908. 1st row, right hand to… 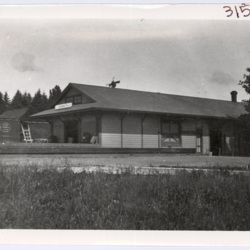 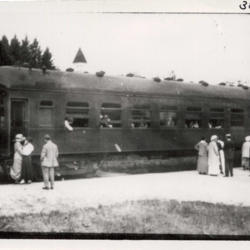 Passengers arriving and departing at Monmouth train stop. Some passengers are in the open windows, while other persons are saying last minute farewells on the platform. The top of the Campbell Hall bell tower and the old grove are in the… 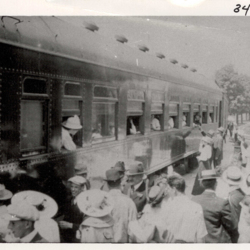 Passengers arriving and departing on the busy Monmouth train stop. Passengers are in the open windows passing last minute farewells to persons on the platform. People waiting in line to embark are being directed by the conductors. 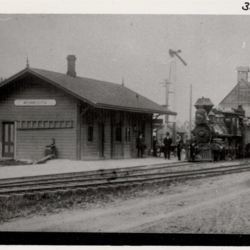 Monmouth Railroad Station of the Southern Pacific Railway with tracks in the foreground. People are waiting by the stopped engine. The flour mill exchange in the background. 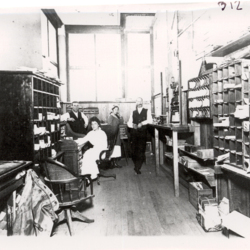 The interior of the Monmouth post office when it was located in the Monmouth Improvement Co. building about 1910. Four persons are posing for the photograph. Note the old roll top desk which is now part of the WOU archives collections. 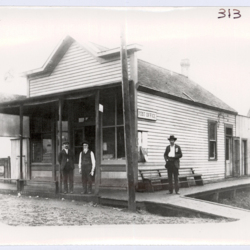 Exterior view of the Monmouth post office. Three persons pose on the wooden sidewalk (two in front, one on the side) before a muddy, dirt street. This photograph is noted as Monmouth's first post office by Scott McArthur in "Monmouth Oregon the Sage… 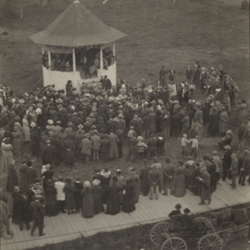 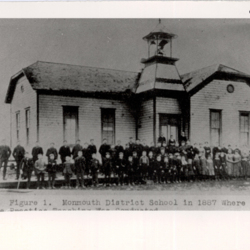 The Monmouth District school was a two-room, wooden building constructed in 1886 . Oregon State Normal School contracted its use as the model school to provide practice training for future teachers. A year later a second story with two additional… 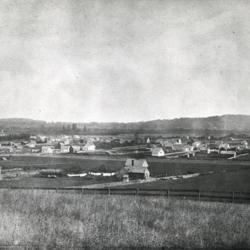 Scenic View taken from Cupid's Knoll with a full landscape view of Monmouth. A field is in the foreground.
Old ACC.RG.2012.601 Photographs/Buildings: Cupids Knoll 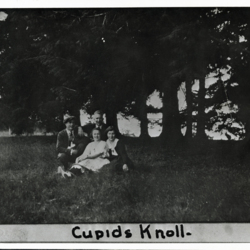 Four people sit in a grass field at Cupid's Knoll smiling towards the camera with tall trees to the right. Caption below reads "Cupids Knoll-"
Old ACC.RG.2012.601 Photographs/Buildings: Cupids Knoll 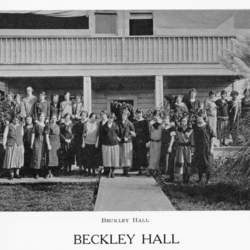 A group of women stand in front of Beckley Hall with view of the second floor patio and the sidewalk leading to the front door. The caption below reads, "Beckley Hall"
Norm yearbook, 1925, page 195 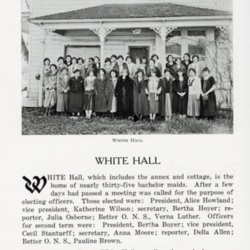 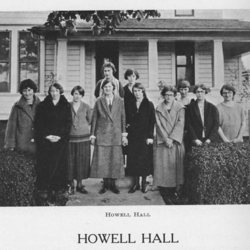 Group Picture in Front of the Roselyn, 1925 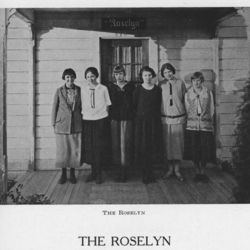 Six women stand on the patio in front of The Roselyn with view of the front door and a wooden plaque above the door that says, "Roselyn". A caption below the image reads, "The Roselyn"
Norm yearbook, 1925, page 199 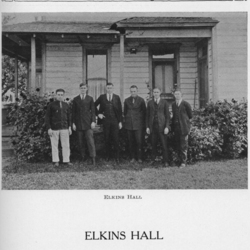 Six men stand in front of Elkins Hall with a flowering bush behind them. The Caption below reads, "Elkins Hall"
Norm yearbook, 1925, page 201 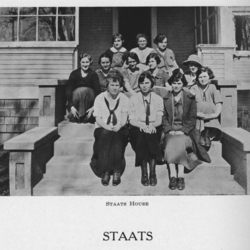 A close up view of twelve women sitting on the front steps of the Staats House. A caption below reads, "Staats House".
Norm yearbook, 1925, page 202 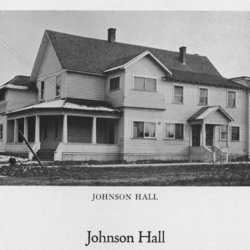 Full Landscape view of Johnson Hall with view of the front and side. The yard to the left is sprinkled with snow.
Norm yearbook, 1923, page 129 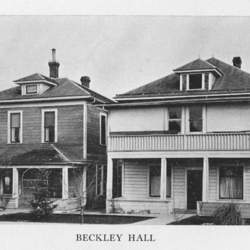 Landscape view of two buildings very close to each other with the right one having a second floor deck and the other having a large first floor patio. The Caption below reads, "Beckley Hall".
Norm yearbook, 1923, page 128
View all 86 items