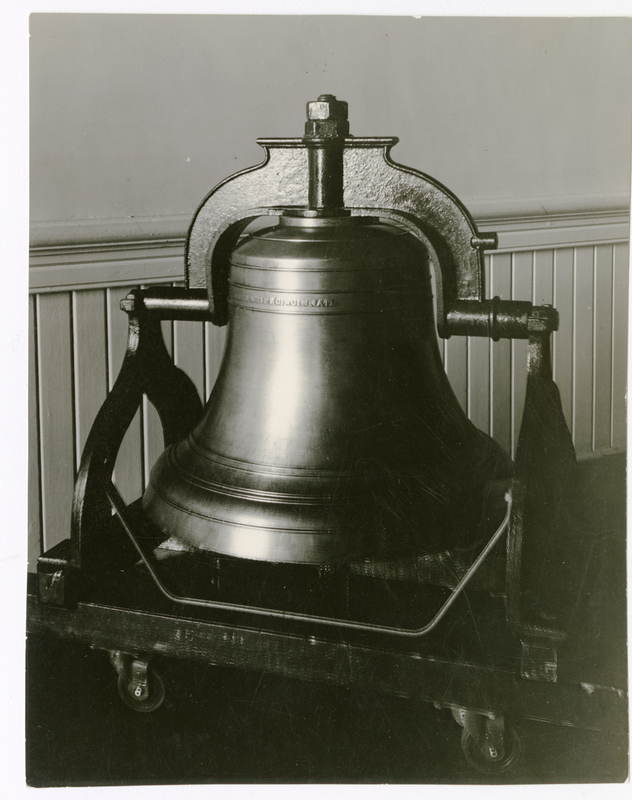 Close up of the bell on the rolling cart rolling cart custom made when the bell was removed from the Bell tower. A side note: as of 2019 the cart for the bell is stored in Swendel Hall.
Old ACC.RG.2012.840: Bell
The original bell was cast in Cincinnati, Ohio in 1886 and was placed in the bell tower with the completion of the south wing of Campbell Hall in 1889. This bell developed a crack and was replaced with a smaller bell from one of the Monmouth churches. The new smaller bell remained the belfry until 1924 when it was removed because local residents complained that students rang the bell incessantly and at inappropriate times.

The bell does not show up again until 1933 when it was mounted on a wooden platform and housed in the Administration building. Theta Delta Phi, a men's service organization, were in charge of ringing the bell when home games were won, and for displaying it at Homecoming and 4th of July parades.

The bell was not in the belfry when the tower collapsed during the Columbus Day Storm in 1962. Because the bell had no place to be hung, the Carillon was gifted by the Alumni Association in 1965.

Now the bell hangs in the tower of the Werner University Center since 1999.

http://rightsstatements.org/vocab/CNE/1.0/
Copyright Not Evaluated: As of 05/20/2020, the copyright for this item has not been investigated by Hamersly Library.