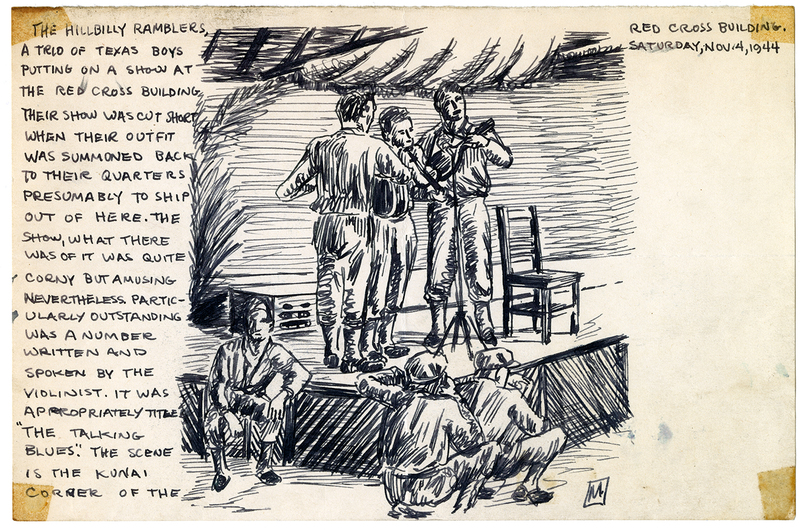 WWII-New Guinea Entertainment.
Ink drawing of three men performing on a low stage with listeners crouched near the front.
Written around the edge of the drawing, "The Hillbilly Ramblers, a trio of Texas boys putting on a show at the Red Cross building. Their show was cut short when our outfit was summoned back to their quarters presumably to ship out of here. The show, what there was of it was quite corny but amusing nevertheless. Particularly outstanding was a number written and spoken by the violinist. It was appropriately titled 'The Talking Blues.' The scene is the Kunai corner of the Red Cross building. Saturday, Nov. 14, 1944."
Maurice explained, a lot of the guys formed bands and The HillBilly Ramblers were one of them. Professional entertainers who had been drafted would put on shows. The replacement depot had some very talented people and they practiced their trade on down time. A memory Maurice shared was that the living quarters were built on top of cliff with the garage for all the army vehicles below. One time while sun tanning, there was a man sitting in mid-air; he was actually on a high wire practicing his craft.
Maurice.1693

http://rightsstatements.org/vocab/InC/1.0/
In Copyright: Hamersly Library has determined, as of 05/14/2020, this item is in copyright, which is held by Alfred P. Maurice.