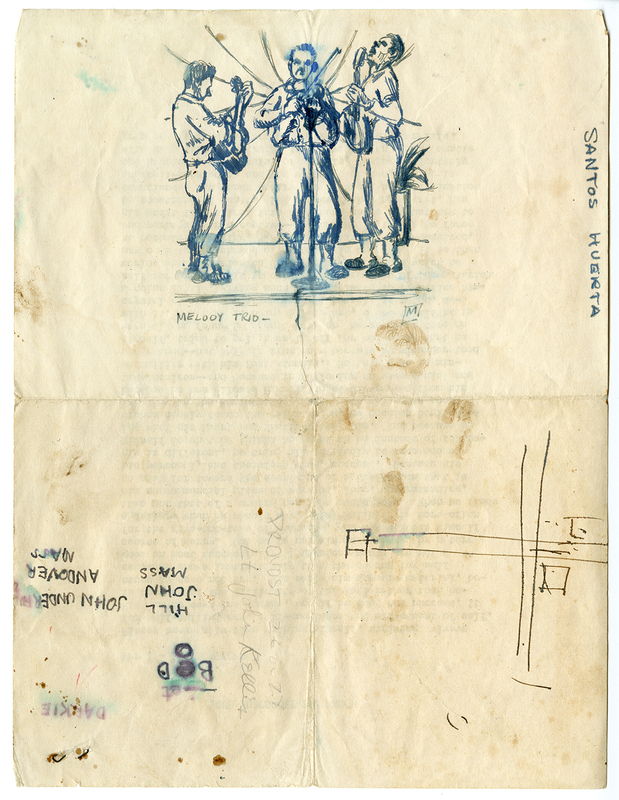 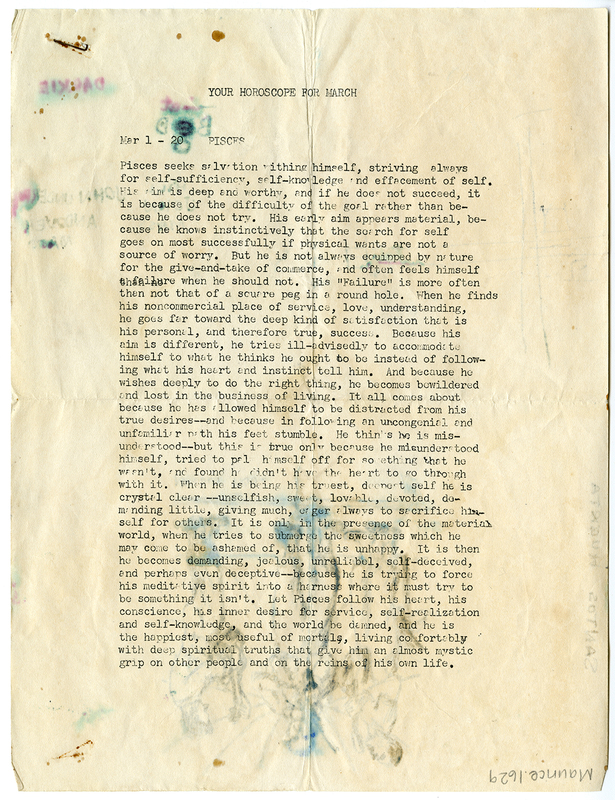 WWII-New Guinea Entertainment.
Ink drawing of three men playing music in front of a microphone and standing onstage. "Santos Huerta" written on the side at 90 degrees. On the bottom up-side-down is written the names of the musicians, "Bob, Hill, John Under, John, Andover, Mass." "Provost 260028 Lt. John Kellis" written in fading pencil at 90 degrees.
Verso: "Your Horoscope for March" "Mar 1 - 20 Pisces" "Pisces seeks salvation within himself, striving always for self-sufficiency, self-knowledge and effacement of self. His aim is deep and worthy, and if he does not succeed, it is because of the difficulty of the goal rather than because he does not try. His early aim appears material, because he knows instinctively that the search for self goes on most successfully if physical wants are not a source of worry. But he is not always equipped by nature for the give-and-take of commerce, and often feels himself a failure when he should not. His 'Failure' is more often than not that of a square peg in a round hole. When he finds his noncommercial place of service, love, understanding, he goes far toward the deep kind of satisfaction that is his personal, and therefore true, success. Because his aim is different, he tries ill-advisedly to accommodate himself to what he thinks he ought to be instead of following what his heart and instinct tell him. And because he wishes deeply to do the right thing, he becomes bewildered and lost in the business of living. It all comes about because he has allowed himself to be distracted from his true desires--and because in following ab uncongenial and unfamiliar path his feet stumble. He thinks he is misunderstood--but this is true only because he misunderstood himself, tried to pal himself off for something that he wasn't, and found he didn't have the heart to go through with it. When he is being his truest, deepest self he is crystal clear--unselfish, sweet, lovable, devoted, demanding little, giving much, eager always to sacrifice himself for others. It is only in the presence of the material world, when he tries to submerge the sweetness which he may come to be ashamed of, that he is unhappy. It is then he becomes demanding, jealous, unreliable [sic], self-deceived, and perhaps even deceptive--because he is trying to force his meditative spirit into a harness where it must try to be something it isn't. Let Pisces follow his heart, his conscience, his inner desire for service, self-realization and self-knowledge, and the world be damned, and he is the happiest, most useful of mortals, living comfortably with deep spiritual truths that give him an almost mystic grip on other people and on the reins of his own life."
Maurice explained that any scrap of paper was used to do a drawing or sketch. Horoscope on the back is connected to his birthday on the 11th of March. He must have found a horoscope somewhere and used it for the drawing.
Maurice.1629

http://rightsstatements.org/vocab/InC/1.0/
In Copyright: Hamersly Library has determined, as of 05/14/2020, this item is in copyright, which is held by Alfred P. Maurice.