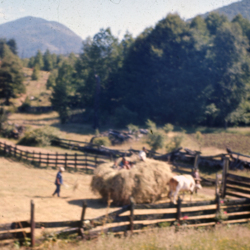 Making hay in a Caburgua pasture.

During early homesteading years, campesinos planted wheat in the ash of recently burned areas. Harvests were abundant. Due to thin soils, heavy rainfall, and sloping terrain, unfortunately the land eroded rapidly. When harvests declined, farmers realized that their fields were only good for grazing.

Cattle and sheep fed on the pastures and while goats thrived on abundant blackberry vines. 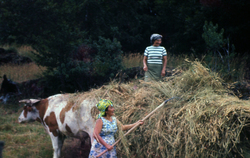 When even pasture became scarce in winter, animals survived on ramoneo, the leaves of saplings. More affluent farmers, who had barns, grew hay and put it up for winter.

The hay harvest was a joyous occasion with women carrying flowers and riding the hay wagon.

South from Caburgua stands Volcán Villarrica. This perfectly shaped, snow-covered, active volcano, serves as a weather vane for Caburgua residents. When west winds blow the smoke toward Argentina, the weather is clear. When the smoke sits on the volcano and forms a hat, then rain will surely follow. When the smoke blows westward, a dry wind from the pampas called a Puelche, brings at least three days of sunny weather. As soon as the smoke's direction reverses, however, rain is on its way. 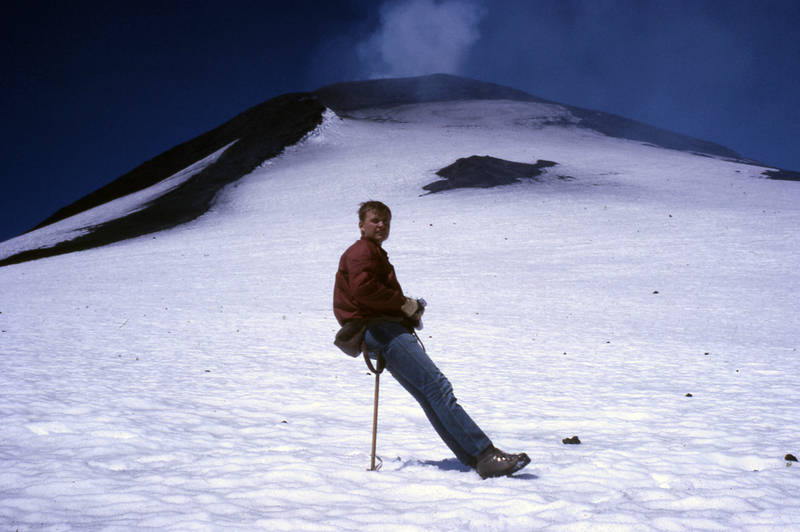 Bill Lehr on the slopes of Volcán Villarrica.

Volcán Villarrica's eruptions sometimes devastate parts of the Pucón valley, but Caburgua is fortunately on higher ground above these avalanches. The Mapuches believed that the spirit, Pillán, lived in the craters of volcanoes. The name they used for Villarrica was Rucapillán (House of the Spirit). An exploded, extinct volcano just east of Villarrrica is still called by its Mapuche name, Quetrupillán (Decapitated Spirit.)

The opposite is the case of Villarrica. In 1964 much of the town of Coñaripe, on the southeast side of Villarrica, was destroyed. In late December 1971 a voluminous flow of ash and sand flowed down the Turbio River and temporarily cut off Caburgua from Pucón. Other weaker, but visually spectacular eruptions occurred in 1984 and 2015. The people of Caburgua are fortunately safe from these explosions, but they have a spectacular balcony to watch the fireworks.

Hundreds or even thousands of years ago numerous cinder cones began to dot the Caburgua landscape, but none have been active historically. In fact, they are now covered with conically-shaped forests. Caburgua, nevertheless, is vulnerable to other tectonic events, especially earthquakes. The region's residents remember these frightening events as if they were calendars, dating events occurring before or after a specific quake.

For example, in 1939 the city of Chillán was the epicenter for a gigantic quake. Likewise, it shook very hard in Caburgua. Older residents remember that it made their mountains roar, turned house belongings upside down and roads into rippling rivers.

In 1960 a closer quake had its epicenter in Valdivia. Lake Caburgua boiled, then sloshed like teacup, nearly overflowing its banks. People who fell down struggled to get up. Trees crashed on houses. Although wooden buildings like houses, barns, and fogones (cook houses) made lots of noise, they rarely fell. Fortunately, there were no multi-storey buildings. Animals became restless, but rarely broke their fences. For humans, the earth's noise and anger seemed like the world was coming to an end. These traumatic quakes became reference points for events that occurred either before or after them.