Life was very hard for the campesinos as well as their flocks.

Due to overgrazing and little hay, it was not uncommon for pregnant cows to lose weight in winter and lack strength to give birth in spring. During the harsh rainy months of August and September, animals commonly died of hunger. In October, as pastures began to grow again, cattle gained weight and were far more successful in giving birth. Sheep often had twins.

Lorenzo, like most adults in Caburgua, learned to serve as a "midwife" to cows, sheep, and goats. When a yew could not give birth, Don Segundo gave him instructions on how reach inside the womb, turn the lamb, and allow it to be born head first.

Some people had too little land to sustain a cow, so they would raise sheep, goats and perhaps a few pigs. The goats were particularly hardy because they ate the leaves of bushes, saplings, and the prolific blackberry vines. With no herbicide, the goats did a good job limiting the coverage of this invasive plant.

Everyone had free-range chickens, and perhaps ducks or turkeys. Some farmers supplemented these birds' diet with grain, but animals that didn't scavenge, didn't survive. Eggs were an important part of the people's diet. A favorite, but not too frequent, dish was cazuela de ave, or chicken soup. It consisted of a potato, perhaps celery or peas, a piece of chicken, and broth. Ají or Chile sauce was optional. Every fiesta served cazuela de ave, which possessed marvelous powers to reinvigorate partiers after a night of reveling. 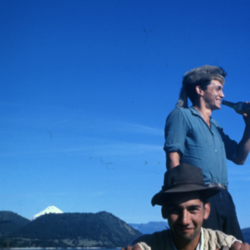 Next to the houses were orchards, which often included apples, cherries, plums, peaches, pears, and a quince. Fruit was consumed fresh, although some people dried it on their galvanized roofs. Quince made especially good jam. Homemakers often made apfel kuchen, a recipe introduced by German immigrants. Men stuffed the majority of the apples into gunnysacks, loaded them on oxcarts, and took them to one of various local cider presses, where the sweet juice was barreled and fermented. During the stormy winter months, the hard cider lifted people's spirits...until it ran out.