Different institutions organized fiestas in Caburgua for fundraising purposes. The first one Lorenzo attended was for the dieciocho, Chile's Independence Day, in the neighboring community of Paillaco a few kilometers from Caburgua. The existing government school was run by headmaster Teodoro Mattig.

The parents' committee used the funds from this fiesta to make improvements on the building. Rarely did the government provide resources for these needs. Parents helped build a ramada and some local musicians played largely Mexican ballads and Chilean cuecas. Young people danced enthusiastically even though it rained inside the ramada. Werner Bratz joked with Lorenzo that these dances are called "piojendanzin."

The return of a son or daughter living far away was also an occasion for celebration. Telling stories, remembering the past, eating a roast, and consuming wine and hard cider were the forms of entertainment on these occasions. Everyone had a story and knew how to spin it. The spirit of unity returned, only to be lost again when the son or daughter returned to the city. 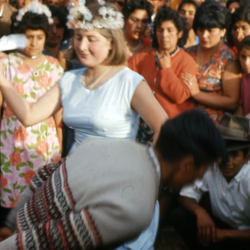 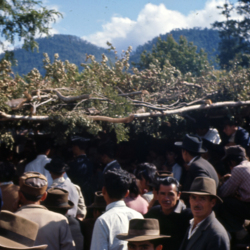 The ramada for a fiesta 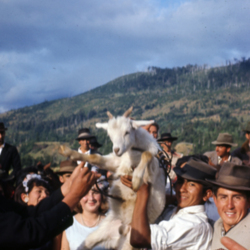 The winning soccer team with their prize 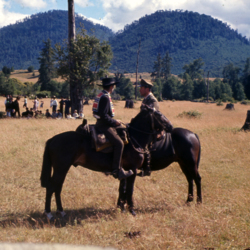 A pair of carabineros (police) on horseback at a fiesta 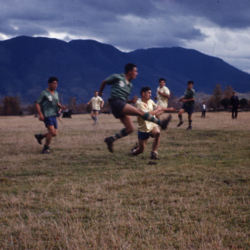 A soccer game at a Caburgua fiesta 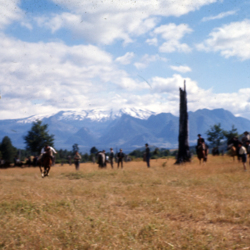 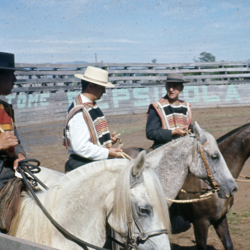 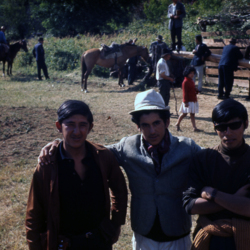 A group of teenagers at the Caburgua fiesta

The Queen and Her Court

There was a particular affection for January 20, the fiesta of San Sebastián. The local soccer team organized a tournament in a cow pasture, where players ran full tilt over the uneven field without suffering any injuries in an impressive display of strength and coordination.

They presented the queen and her court. The winning team received a goat, which they probably turned into a tasty barbecue.

Another San Sebastian festival centered around horse races called Carreras a la Chilena (Chilean style racing).  According to custom, one rider challenges another to a race and bets on the outcome. If the second rider accepts, they race over a straightaway about 200 meters long. Spectators bet with each other as well.

In 1966, after the races were over, a ten-year old boy challenged Lorenzo to a race. In spite of little riding experience, "el gringo" accepted. The horses took off and the boy led from the beginning. Suddenly Lorenzo's horse zagged left, while he kept going straight. Thankfully, few people saw the spectacle.