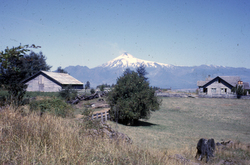 The Luengo house, with barn.

In the early 20th century, large land grants, logging, and homesteading moved east from Pucón up the valley toward Argentina. Although a number of sizable estates were formed in this region, due to poor soils of the volcanic sands and numerous lava deposits, the Caburgua Valley area remained unattractive to large farms and ranches.

As a result, those who forged the early Caburgua community were Mapuche inhabitants who had signed land cession treaties, Chilean campesinos, and Germanic immigrants. Ironically, a number of Chilean settlers had lived some years in Argentina. 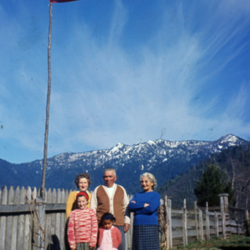 Some members of the Luengo extended family.

Don Segundo Luengo, for example, was born in southern Chile (Angol), then crossed to Argentina where he drove cattle with his father throughout the southern pampas. As a young adult, he returned to homestead Chile, married Zoila Espinosa in 1917, and began to farm near Cunco. Powerful landowners, pushed Segundo, Zoila and other settlers off of those lands, so they migrated to the more marginal lands of Caburgua.

They homesteaded about a mile south of the Lake and together cleared the forest, built their humble dwelling, and began a family. Enrique, the first son, was born in the 1920s and worked on the family farm his entire life.