In the 1960s, there was little employment in Caburgua.

Occasionally, owners of rustic sawmills powered by 19th-century steam engines tried to start a successful lumber business. Enrique Luengo, for example, employed about a dozen workers at a mill. The workers produced stacks of lumber, but a national construction slump limited sales and ended the venture.

No farming operations were large enough to hire additional workers. A few artisan activities like hewing railroad ties, making oxcart wheels, and splitting shingles provided some meager income. In the fall, selling a steer or a few pigs, and perhaps some grass seed, were the limits of commercial activities. Disappearing forests made hard woods scarce, and hauling lumber by boat or oxcart was difficult. Few economic options seemed to exist for the impoverished region. 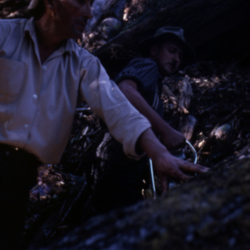 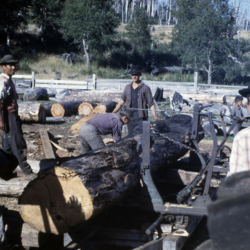 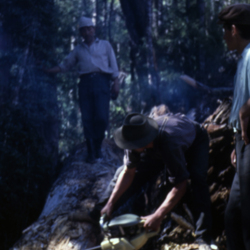 Using a chainsaw to buck logs 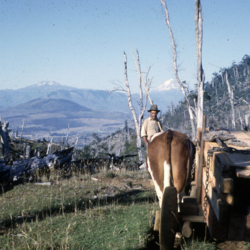 An oxcart laden with railroad ties

Women, however, engaged in a variety of home industries. During the spring milking season, they made delicious white cheese. They baked bread at home and occasionally sold it to tourists in the summer. 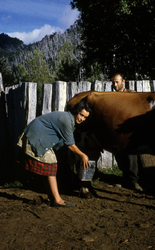 They also spun wool, usually with a hand spindle. Most knitted, but some had looms in their houses which they used to make mantas (ponchos). The natural lanolin of the unwashed wool used made this clothing virtually waterproof. In a damp climate where it rained at least nine months a year, these mantas were one of the few garments that kept farmers dry.

Women also tended the family garden, raised chickens and other fowl, and preserved foods for winter.

When young people reached the ages of 17 or 18, they often left Caburgua.  For boys there were typically three options. Some went to Neuquén, Argentina to work in orchards or fruit packing houses. Some went to Concepción to work in the coal mines or other sundry jobs, while still others tried their luck in Santiago as elevator operators, waiters, or in construction. Girls frequently became maids for urban, affluent families.