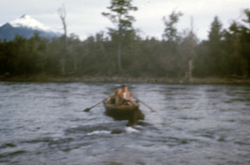 A typical river crossing of the Rio Trancura

Lorenzo's first exploration of Caburgua began in October 1965. He took the Quelhue route, but with no bridge to cross the Rio Trancura, some Mapuche youths rowed him to the other side in their boat. As he began walking a wagon road that hung to the side of the hills, he passed two men sawing railroad ties by hand. Chainsaws were available in Chile, but few workers had funds to buy one. 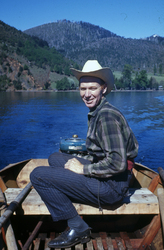 Werner Bratz with his motorboat

On the three-hour hike, it rained continually, and then poured when he reached Lake Caburgua. He inquired at a bungalow on the south of the Lake. A middle-aged women named Hedwig Bratz invited him in to dry off. Later she persuaded him to spend that night and the next day, before catching a truck heading to Pucón. Her hospitality refreshed him both physically and emotionally. Later he would develop strong bonds with her son, daughter-in-law, and their children. Her daughter, Ingrid, who married an American and now lives in Colorado, became a faithful correspondent. 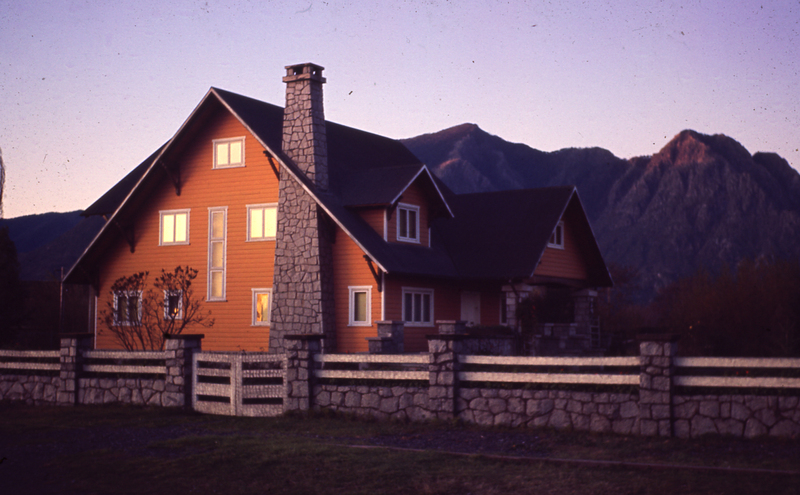 The hostería of Rigo and Gaby Teuber

The next day he discovered a different road, which the government had recently opened with a bulldozer. As he was walking, a man drove up in a Unimog truck and offered him a ride. His name was Socrates Gatica and he was buying grass seed in Caburgua.

Socrates dropped him off at the hostería of Rigo and Gaby Teuber, where Lorenzo usually stayed in Pucón. Rigo and Gaby thought that he had disappeared off the face of the earth. Rigo laughed and questioned whether he was running through the woods after cattle like the other Caburgua natives.

Considering Caburgua's relative isolation, it is surprisingly tri-lingual. Although the majority of the inhabitants speak Spanish, Mapuche and German are also common. The Bratz brothers, who spoke German, had been born in Brazil but then migrated to Chile. Carlos and his wife Hedwig homesteaded in Caburgua, whereas his brothers, Willie and Bernardo, settled at nearby Lake Tinquilco. All spoke Spanish with an accent. "Don Otto" jokes are famous in Southern Chile. Those who tell them try to imitate a German accent.

There are at least three extended Mapuche families in Caburgua: they are the Nahueles, Lefiñancos, and Colipes.  In the 1960s the older members spoke their traditional language fluently, but they did not use it publically for fear of ridicule. All residents, including the Germans, know some basic Mapuche vocabulary, but lack fluency. 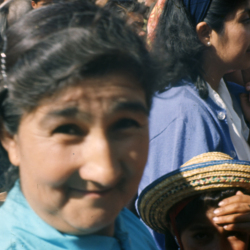 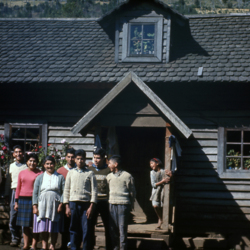 The Nahuel family in front of their home. 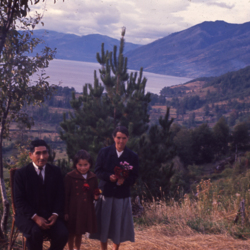 Cesario Lefiñanco and family, with Lake Caburgua in the background

Rivers, valleys, and mountains have mostly Mapuche names and local residents usually know their Spanish translation. For example, the outlet stream of the Lake Caburgua is Carileufu (green-stream). A neighborhood next to the lake is called los Nahueles (pumas) and a nearby community is Quilaco (bamboo water).  Spanish-speakers also know a few Mapuche riddles and jokes which mock the native culture. Not surprisingly, Mapuche youth are reticent to speak their parents' language in public.

One of the most important social centers in Caburgua was the store run by Enrique Castillo and his wife Ana. Enrique was also the local chiropractor, putting dislocated bones back in their sockets and prescribing appropriate home remedies. Ana welcomed various orphans and incorporated them into her family. Their only son, Arnaldo, became the unofficial historian and genealogist of the region. He knows everyone and can map their family tree. His information and stories form a part of this essay.