- 50 commuter students were unable to get home and stayed the night in the College Center.

- Todd Hall and Cottage residents were moved to sleep overnight in Arbuthnot Hall.

- 720 students were served dinner that night.

- Many students volunteered to help clean up the debris and assisted local residents with damage clean up.

President Leonard Rice praised student's reactions by saying in a statement: "The good humor, maturity and group spirit of the students and huge adjustment to the storm are what had the greatest personal impact on me. A lot of people who share views that college students are 'rowdies' should have watched our students...it is a thrill to see students respond better than adults; it was a marvelous thing to see them stand up and be counted; the response was wholesome, with no hysteria whatsoever." 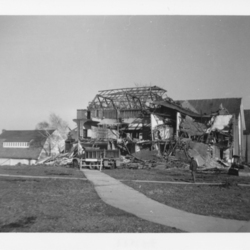 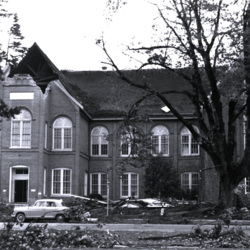 Campbell Hall lost its famous bell tower, and the South Wing suffered enough damage that it was later razed. Faculty offices that once resided in the building were temporarily moved to nearby buildings such as Swindell Barn. The Humanities and Social Science building now stands in the bell tower's place. 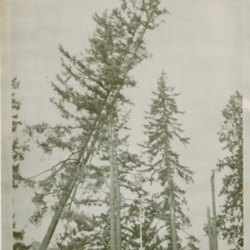 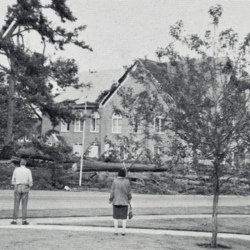 Storm damage to the Grove consisted of approximately 35 felled Douglas Fir trees. Due to the abundant rainfall in the area, the tree roots were not deep, making it very easy for the trees to be blown over in the storm. Many of the trees were chopped down.

"The blow down of the Grove stands out in my mind as the trees were bent so spectularly, limbs flew away far down wind, and the trunks were shattered." (Ray Brodersen)

"We were in an Economics class...the wind blew, the lights went out and we heard a siren. Pretty soon we heard a crash and the professor said, 'There goes Campbell Hall.' Class was dismissed and we ran across the hall window to look, the tower was gone." (OCE Student)

"I was teaching a class located on the South side of the now-replaced south wing of Campbell Hall...As the winds increased, branches broke through the windows, showering glass in the back of the room...After class I left the building and happened to be standing behind student Wes Luchau when he took the now famous photograph of the topling Campbell Hall tower." (Gary Huxford)

"Notice of the ominous building wind was barely at the conscious level by most around the campus until the resounding crack of a tree more than two feet across, breaking midway up the trunk, tanked the presence of the storm into full reality...Trees, swaying desperately, began to break apart, dropping their tops over Monmouth Avenue. Several people rushed in an attempt to move cars parked along the street where the trees were falling. Some were locked and the owners, considering the risk, watch helplessly as the vehicles became almost buried under large branches...Trees fell with resounding crashes against the south wall. The building was abandoned; several people with hard hats checked the many rooms and alcoves of Campbell -- they could sense the old building's distress." (Bud Smith)